This bookcase / desk is known as a Larkin Desk. It was manufactured by the Larkin Soap Company around the turn of the 20th century and was sold through catalogs as the Chautauqua Desk.

Restoration for this desk started with removing the beveled glass mirror to put in safe keeping until all work was completed.

Next, the loose joints and broken lid were glued and clamped.

Some of the carvings were also re-glued, and the small shelf above the mirror was set back in place.

The worn holes for the pivot screws (to attach the drop-lid) had to be plugged and re-drilled. This took some time to get right, keeping in mind the lid had to be aligned when closed, and then flush with the shelf when open. Once this was done, new support chains were installed.

A new back panel was also fitted and colored to match.

Reconditioning of the existing finish consisted of cleaning and some color work. A couple coats of shellac were then applied, rubbed and waxed.

The mirror was re-installed, and a new key was fitted for the lock.

This desk was restored for a Falls Village CT client.

Let’s Get Started On Your Project 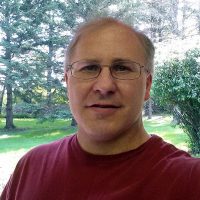